Field planting of blueberries in Maryland 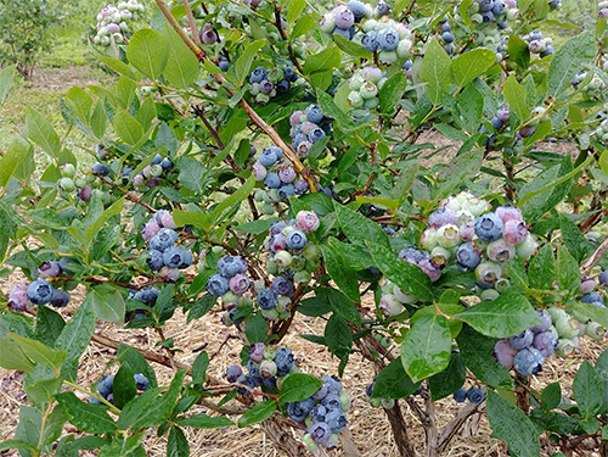 Significance to industry: When considering mineral nutrition in blueberries, growers should be cognizant of Na levels in tissue analysis. Interspecific hybrids between Northern and Southern highbush blueberries appear to be better adapted to the upland soil conditions frequently encountered in mid Atlantic, suburban Pick Your Own operations.

Good farmers struggle when trying to grow Northern highbush blueberries (Vaccinium corymbosum) in upland soils. For the past few years we attempted to unravel the reasons for stunted plant growth seen in upland soils, even after amending soil pH and adding organic matter. We have also noted greater vigor of Southern highbush plants (interspecific hybrids arising from a cross with V. darrowi) in Maryland’s upland soils. These observations led us to conduct trials to understand the complex role of blueberry plant nutrition in upland adaptation.

In addition to increasing iron (Fe) availability, lowering pH in mineral soils increases the availability of manganese (Mn) and aluminum (Al). While Mn is an essential element for plant growth, Al is not. Both elements are known to be a problem for plants grown in acid soils. While organic amendments are typically used in upland soils, amendments with high concentrations of salts are not recommended. In those amendments, sodium (Na) may also be toxic to these plants. The slow, stunted growth of blueberry plantings in many Maryland upland fruit plantings led us to also test whether containerized blueberry plants could be a potential alternative for local small-fruit producers.

Field trial Upper Marlboro. In spring of 2017, 40 plants of Blue Ray, a Northern highbush variety and 40 plants of New Hanover, a Southern highbush variety were planted into either 2-gallon nursery containers or were planted directly into the ground in a two row, alternating-by-variety pattern. The treatment of either pot or in-ground was randomized throughout the block. The medium in the containers was a mix of a commercial peat-based potting mix, pine fines, and sand. Soil tests revealed a high pH (6.9 – 7.4) and optimum, to-above-optimum levels of phosphorus, potassium, magnesium, and calcium. The CEC was high, 7.8 – 11.0. The soil was amended with elemental sulfur (S), sprayed with glyphosate, and covered with landscape fabric for weed control. Half of the trial was under a high tunnel and half was in the open air. All plants were maintained on drip irrigation. The plants were fertilized by hand using ammonium sulfate. By the end of their first growing season these plants had made excellent growth, and many had appeared to set flower buds for the next spring. Leaves were harvested, dried and sent for analysis in October 2018 and again in August 2019.

Greenhouse trial. In the spring of 2018, 418 rooted cuttings of 11 varieties of blueberries were potted in a mixture of commercial peat-based potting soil, pine fines and sand and grown in small nursery pots in a research greenhouse. By August, the plants had grown sufficiently to be potted into 4” nursery containers in a mix of commercial peat-based potting medium and pine fines. The plants were wintered-over in a cold room for six weeks at 4o C (38o F). In March the plants were returned to the greenhouse and were placed on ebb and flood benches. They were bathed in a Peters 21-7-7 at a rate of 50 ppm daily then increased to twice daily by June as the weather warmed up. The plants were up-potted into 1-gallon nursery containers to accommodate their growth. Leaves were harvested in mid-May and dry weights were obtained. The plants were then moved to an outside cold frame for the summer. In midSeptember 176 plants were returned to the ebb and flood benches and placed in random array of 11 varieties of 2 individuals each in 4 blocks. Fertilizer rate was increased to 75 ppm. Approximately 50% of the new growth was pruned in October. By early November dormant buds had formed on all plants.

Field trial. Consistent with grower observations, the field trial at Upper Marlboro showed greater vigor in New Hanover plants than Blueray. Tissue analyses taken in the second leaf showed Blueray leaves had greater levels of N, Mn, Al and Na than leaves from the New Hanover plants. Planting in soil increased leaf levels of essential elements of N and K as well as the phytotoxic element Al. There were no interactions between cultivar and planting system in this trial (Table 1).

The greater vigor in the Southern highbush plants was related to lower levels of leaf N, Mn and Na. A similar pattern was also seen in the Northern highbush plant Legacy. While this has a longer chilling requirement than Southern highbush plants, it does have V. darrowi in its genetic background. Seeing greater vigor in plants with lower N levels was not expected. It is impossible to know whether the differences in N nutrition are caused by root uptake or shoot vigor. Also unexpected were the correlations between N, P, S, Mn and Na levels. This is intriguing and should be considered by plant breeders and researchers interested in producing blueberry plants for upland conditions.

Table 1. Effect of cultivar and planting system on the mineral nutrition of highbush blueberry plants in Upper Marlboro, MD.

Table 2. Effect of cultivar and provenance on the leaf analysis of highbush blueberry plants grown under fertigation in an ebb-and-flow greenhouse section.